Last weekend I was in Goa on a leisure trip, which gave me an excellent opportunity for some photography. I carried the RX100 for landscape and street photography. The D90 also came along mainly for long range shooting with the 55-300mm VR and low light shooting with the 50mm f/1.8D. This trip allowed me to sort out some things related to the pros and cons of using a big DSLR vs. a small compact. Here’s how the cameras fared.

I used the RX100 for wide-angle landscapes and the D90 for telephoto landscapes, especially sunset shots, and beach candids. One peculiar issue with the beach scenes was the haze from the sea breeze. The RX100 RAW files offered very little possibility of recovering tonal data from the low contrast scenes. I should probably have tried ETTR, but then the idea was more of “Point & Shoot” action. The D90 RAW files offered much better scope of recovering contrast and I’m much more pleased with the results from the D90. The other nagging problem with the RX100 was its inability to acquire focus fast enough. My friend and I were walking along the beach after sunrise and his Canon G12 consistently beat the RX100 at face detection and AF speed/accuracy. I guess the reason is that RX100 uses CDAF with very tiny pixels and having a hazy environment plays against that.

This is primarily a review of the RX100 in these situations, since I didn’t use the D90 for this. I did a 12km walk through the town from Calangute to Sinquerim and back with the D90 slung on my shoulder and RX100 in my hand. I loved using the RX100 on the street. I mostly shot in Aperture priority, Auto ISO with the lens ring used for zooming (mostly set to 35mm or 50mm equiv.). The RX100 gave excellent results on the street with details being resolved to full 20MP. It was also good to have all the DoF available without using small apertures, thereby leading to lower ISOs. Apart from the IQ, the other nice thing about the RX100 is that it is 100% operable single-handedly. There are no buttons or dials that can’t be reached from the right hand. Having the lanyard wrapped around the wrist allows for loosening up the body grip a wee bit to access the buttons along the right edge. Thanks to the customizability of the controls, I could adjust the RX100 for my needs as quickly as I do on the D90. Perhaps faster, in some cases because I could hold the image in the screen while single-handedly changing the settings – something that wouldn’t be possible with most controls on D90 that require taking your eyes off the viewfinder unless you know the buttons by touch. After 3 years of regular usage, I still can only operate the command dials and AF point selector by touch.

The only nagging factor again was RX100’s AF. For reasons beyond me, the RX100 confirmed focus while being just in the ball-park whenever I tried shooting without halting in my walk. That’s something I’ve rarely seen with the D90.

Low light photography was a mixed bag. The RX100 worked well for indoors with enough light to expose at 1/15s, f/1.8 ISO 3200 or brighter. Doing long exposures at night with RX100 was not that much of a success. You just can’t do astro-photography with the RX100, for example. The D90 + 50mm f/1.8D was complementary to the RX100 in that it was slower to focus and gave darker looking shots in the kind of light that RX100 could handle. However, the DSLR outclassed the compact where long exposures were concerned. 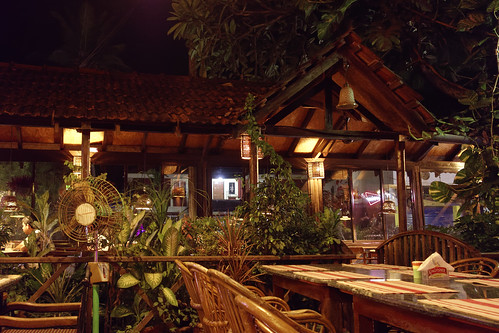 I actually like using the RX100 for low light photography. I like the way it brightens up shadows and the fact that despite its small sensor size, it’s got so much data from its 20MP sensor that NR algorithms can do a pretty good job on its output. But the reasons are not just limited to photographic capability. A crucial factor is that most of my low light photography happens at social events – meeting up with friends, dinners, parties, etc. The non-intimidating RX100 just feels more “at home” in these situations than a big DSLR.

One of the biggest questions I sought to answer with this trip was on the handling front – how does a compact, especially one that’s not the best handling of compacts available, fare against a DSLR, which is designed to be a champ at usability? At the outset, both styles of interface have their benefits. The compact overcomes its lack of twiddly bits with customizability and some clever UI design. This means that neither of these two cameras is at a disadvantage to the other where handling is concerned. To make things even more difficult, each camera has a crucial advantage that the other can’t have by design.

The RX100 simply excels at single-handed operability. Most of it depends on which 7 functions you assign to the “Fn” button. This is something that you would figure out over time, as you get to use the camera and learn which options you tend to access most. It took me 2 months to arrive at the configuration that I have now. The reward is that I can use the camera properly in situations where I couldn’t even think of using the DSLR.

I occasionally take pictures of my kids while playing with them or putting them to sleep. I need one hand to engage with them or hold them. Being able to use the camera with the other gets me more pictures. While on this trip, I took the RX100 with me while I was up in the air parasailing. I could actually use the camera while suspended in the air from a parachute. That’s just brilliant! And something that I won’t do with the D90 even in my dreams!

The D90, though, has its own redeeming feature – TTL Optical Viewfinder. I’ve tried the viewfinder on Fuji X100 and hated it. I’ve tried the EVF on OM-D E-M5 and it just didn’t feel right. Nothing can connect you with the scene like a good TTL Optical Viewfinder. That’s something you can’t get in a body that doesn’t have a mirror and that’s something which dramatically changes your shooting experience and ability to shoot at the right moment.

The rather disappointing conclusion is that neither camera has a big lead over the other, which doesn’t help at all when trying to decide what format to go for. The interesting thing, though, is the areas in which the cameras gain over each other. I never expected the RX100 to lose out on IQ and performance in broad daylight. Nor did I expect it to hold strong against the D90 in low light.

The one contentious area is Street Photography, where I didn’t even use the D90. Would the scores have changed if I had used the D90? I don’t think so. What the D90 gains with its AF performance, it loses in stealth and lower resolution. One of the situations I’ve not reviewed above is also shooting out of a vehicle. I’ve shot out of moving vehicles with the D80 and the D90 but somehow, I never got the same success rate as I got with the RX100 set to 1/800s, f/2.8, Auto ISO.

I’ve shot regularly with a 2 camera kit since I got my NEX-5, two years ago. I think a 2 camera kit is a winning strategy, with one camera covering the normal – tele range and the other covering wide – normal range. The big question is, what type of body do you use for each? If you’re looking to minimize weight, a small sensor body will yield a much smaller telephoto package. I think, however, that having a TTL OVF is vastly more important for telephoto shooting. Having a small camera for wide/normal shooting also works very well for street photography.

So that’s my recommendation: use a 2 camera kit wherever needed, with a good, small mirrorless for wide-to-normal focal lengths and a DSLR for telephoto.